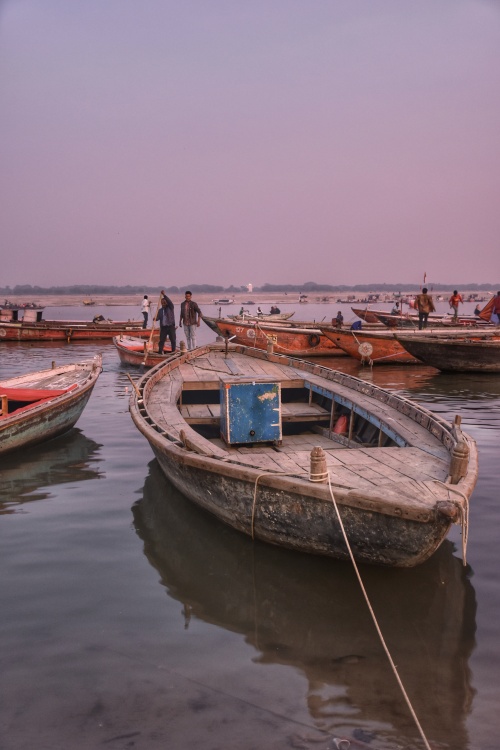 A Boat in the river of Ganges at Banaras, India

I have previously shared my encounters with scammers and con-men on the street, trying to get money or other stuffs, but mainly money. These posts are filled under the tag scam.

In general I would skip and ignore such things. Though I would seldom give such people asking for money a chance. This time it was in Oxford, England.

Within my brief stay at Oxford of around a week, random people asked me for small changes, 25p , 50p etc. I do not know how the city works, and if it is normal (I don’t think so), therefore I see this as a tapping method to see where is your wallet. Later, an accomplice of will carry out the main task.

I met a guy in Oxford who was originally from my city. It was our last day and we went to a good place to have dinner. After dinner we walked towards Balliol College where we were staying. It was around 9pm. Suddenly a frail young British woman (assuming from the strong accent) approached me and asked for some money. She looked helpless. Her story was she has to take a bus to meet her mother, and she doesn’t have money. I did what I do in my city, kept on walking without even slowing down. I had no intension to give any money to this woman.

Suddenly this guy, who was with me, stopped and told me “hey what do you say, should we help her?”, I told “ofcourse not!”. We talked within ourselves in a different language than English.

As the guy stopped, I also had to stop. Now the woman stood in front of me with her hands together, and she was crying. She told even if I don’t want to give her money, I can buy her a bus ticket. I told my man “let’s go!”. I think he just felt really bad for the woman. It’s not his fault, he is a kind person, I felt bad as well. As I have explained in my previous posts, not everytime we could go with the benefit of doubt.

He reached for his wallet and I stopped him immediately. I handed the woman whatever coins I had in my pocket, should be around 2 to 3 Pounds. Then she asked for some more from my man, as this is not enough for the bus fare. I just asked this guy to walk away from her. He was like, “maybe it is not enough …” and took out his wallet and got her a few more pounds, while a staggering amount of cash peeking out of his wallet.

I tried to get him out of this as quickly as possible. Finally we were out. She went somewhere.

Now, it’s not a big deal, as always, to give a few Pounds or Euros or tens or a hundred Rupees, but as far as I know this is one of the basic scams. Maybe she’ll get a drink or something else, or maybe she’ll buy food, or maybe she’ll really take a bus and meet her mother.

As I have mentioned before in the previous posts, most of these, in fact, almost all of these are scams, but there is always a chance of a genuine case.

It is important to keep an eye open for people in genuine need. 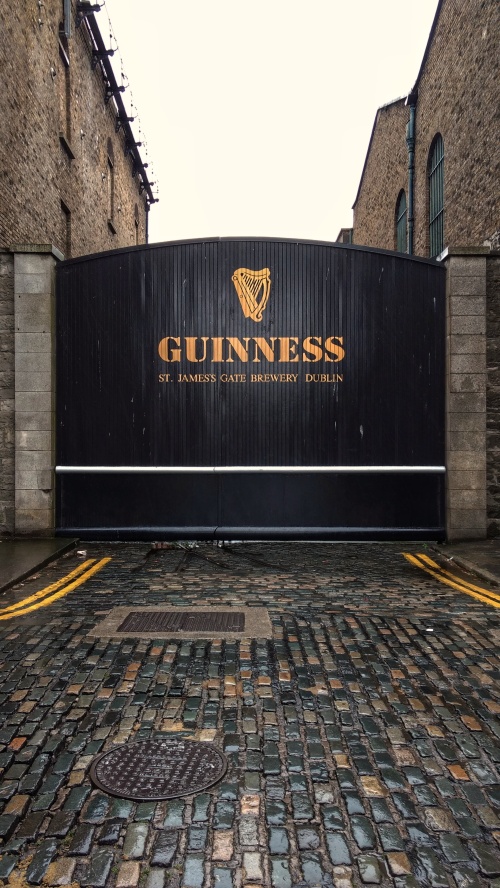 There were visitors last month. I showed them a few places along with the Guinness storehouse. I always wanted to take a good and clean picture of the iconic Saint James’s gate. This time I got a good one and here it is.

Last day I needed to go for an appointment early in the morning, but, I would have been happier if I didn’t have to go, as I did not sleep well a few days. Also, when I woke up, the predictions were the winds might go upto 60 Kilometers per hour. I had to get up.

Last night the predictions were not that severe, so I left the windproof jacket hanging on my desk’s chair. Therefore I went out with whatever I had to reach my desk to to get the outer shell from the chair. Also, I left with just my sandals last night, so I got my shoes as well, which was under my desk.

It was truly very windy. I am not a very heavy person, possibly the lightest person within my age-group. Still, people were performing Michael Jackson moves due to the wind, and sometimes being pushed backwards as the wind was too strong to beat and go forward. At a point, I couldn’t just proceed and had to hide behind a wall for a minute, before pushing through the wind again.

There was another problem, the wind was so strong the rain was hitting the people almost horizontally. The estimated feel was around -2 degree Celsius at that time, so it was not that enjoyable. I needed to get to the bus stop and then get a bus. My trousers were all wet till that time. Fortunately I had a track pant kind of stuff underneath  which was still dry.

After that, the cloud cover started to move and such a surreal scene was revealed. Therefore the picture, while still struggling to stand due to the wind.

Afterwards, the weather fluctuated like crazy. For example, it was raining when I got into the bathroom, when I came out it was bright sun without any trace of rain. That’s not surprising, given the country.

Here is another picture when the cloud cover removed and while I was waiting for the bus.

A few days ago. Liked the symmetry with the the water nozzle and the power socket breaking it. 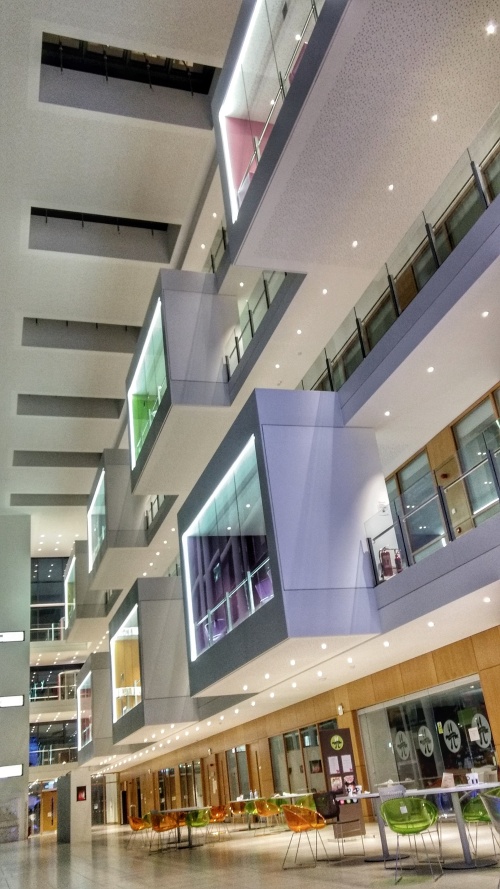 No one is there at this moment of time.

A lot of the young (or younger) people these days does not know what a cassette is. It is something like this. 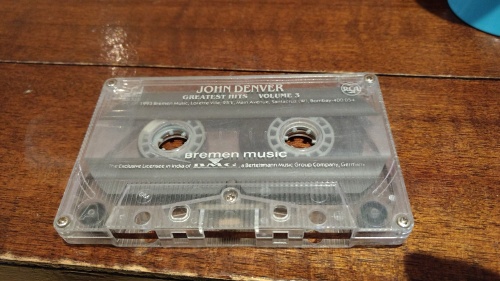 It has a tape with a kind of a magnetic layer on it which has music (data) encoded on it.

In an audio cassette, you have to play from the beginning, and you cannot just skip to the next song. You  fast forward the player, so that the tape reel rotates fast, and then stop the fast forward and play  it to check if  you have stopped in the correct place. Although there were some high end players which can sense the silence between the two adjacent tracks and stop it automatically, but seeking to the next song was purely a skill. Also, no random jumping, just sequential. This cassette has 11 songs by John Denver.

A magnetic reader can read the audio and play it (an audio cassette player). This is a cassette which I used to listen at home more than a decade ago, possible fifteen years ago. I got it out today and played it. Once one side has ended it felt indescribably good to take the cassette physically out and change the sides (which you have to do). This was fantastic.

I kind of like all the old stuff. I have an old Aiwa Walkman (portable audio cassette player), Intel 80486  system, and Intel Pentium MMX, an  Intel Pentium D,  an AMD Athlon X2, old iPods, 3.5 and 5.25 inch floppy disks and their drives. A few very old printers, including the old dot matrix printers, Punched cards and their reader, old physically large hard disk drives which can hold, say, a few hundred megabytes. Also, I believe we still have the old rotary phone, and also Nokia 1100, and a lot of other things, including calculators, memory units, wireless phones and etc. I love all of them and have still preserved all of them. These are fantastic pieces of hardware.

After playing the cassette, I remembered all of these things. After I compared these to the kind of phone I carry, I think still, these things have a greater value than anything. In fact, whatever I have used, and is not being used, is still kept in my home, even if they don’t work, as they record a piece of history and represents.

I am pretty sure, after a few decades, these will be gold.

Someone retired today, so there was a farewell gathering. After everything happened the helium balloons were still there at the break out area.

There were quite a few balloons tied to a weight. I was thinking if I could attach something light enough, so that the balloons float, and do not move up or down, it would be fun.

Someone else had this idea too. As he was doing exactly the same thing. I joined him. After quite some time, we were able to get a decent weight with a spoon and a few pieces of paper, that it floated, well, kind of. There were a lot of air flow through the vents, but the balance looked cool and it was real fun. We reattached the heavier weight and left it as it was before.

Sometime later, we thought why not inhale the Helium and have fun? The fun is, if you inhale Helium, and then speak, your voice will change and will have a higher pitch. It will sound like Donald duck.

Another guy was passing by, he joined us. So we took one balloon and started taking rounds inhaling the Helium and speaking. It sounded hilarious. Although the voice will change only while the Helium is inside the lung.

It was real fun to try these stuffs. Also, all these just from a Helium balloon.